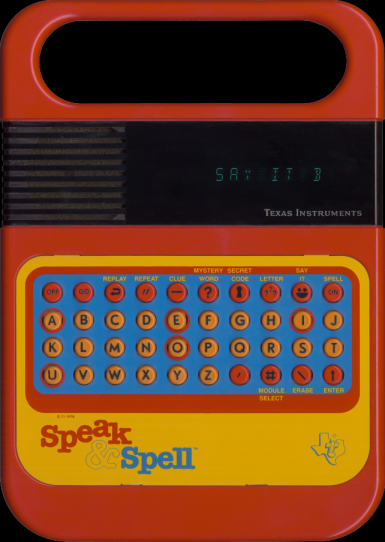 This Speak and Spell can be controlled using a mouse or from the keyboard.
From Wikipedia:
The Speak & Spell line was a series of electronic hand-held child computers by Texas Instruments that consisted of a TMC0280 linear predictive coding speech synthesizer, a keyboard, and a receptor slot to receive one of a collection of ROM game library modules (collectively covered under patent US 3934233). The first Speak & Spell was introduced at the summer Consumer Electronics Show in June 1978, making it one of the earliest handheld electronic devices with a visual display to use interchangeable game cartridges.
The Speak & Spell was named an IEEE Milestone in 2009.
The Speak & Spell was created by a small team of engineers led by Paul Breedlove, himself an engineer, with Texas Instruments (TI) during the late 1970s. Development began in 1976 with an initial budget of $25,000, as an outgrowth of TI's research into speech synthesis. The completed proof version of the first console utilized TI's trademarked Solid State Speech technology to store full words in a solid state format similar to the manner in which calculators of the time stored numbers. Additional purchased cartridges (called expansion modules) could be inserted through the battery receptacle to provide new solid-state libraries and new games. This represented the first time an educational toy utilized speech that was not recorded on tape or phonograph record (as with Mattel's See 'n Say line or the earlier Chatty Cathy dolls).
The original Speak & Spell was the first of a three-part talking educational toy series that also included Speak & Read and Speak & Math. This series was a subset of TI's Learning Center product group and the Speak & Spell was released simultaneously with the Spelling B (a non-speech product designed to help children learn to spell), and the First Watch (designed to teach children to read digital and analog timepieces). The Speak & Spell was sold, with regional variations, in the United States, Canada, Australia, in Europe,and Japan.
The toy was originally advertised as a tool for helping children ages 7 and up[12] to learn to spell and pronounce over 200 commonly misspelled words. It shipped without a cartridge, in this configuration called simply the Basic Unit (containing the minigames, Mystery Word, Secret Code, and Letter).

Reviewer: joanofark06 - - April 27, 2018
Subject: Instructions
Any instructions on how to play this?